During the last two months I worked with a new group of young learners. Quirky as they are, when put together in one classroom their personalities collide and there can be either an outburst or an upbeat class.Experience and knowledge are indeed ingredients that open the way to successful teaching. Moreover, a positive mindset towards our students can let us harmonize the class. Thus having some visual resources at hand let young learners understand and react quickly to classroom needs.

What do you do to calm  your students down? Actually, it was a student that I had some months ago who gave me a simple and brilliant idea: using traffic lights.  He just explained his school teachers used them to let students know when they had to regain their composure. I didn’t try them at that time beacuse the students were able to listen and calm off but I have to admit I  was a little reluctant to use someonelse’s idea.

Two months ago while setting first day rules I just drew traffic lights on one of the top corners of the board and explained  that if they didn’t turn on all the lights they would be able to choose an activity for the last five minutes. Crossing out a light meant turning it on. Luckily I bought red, orange and green markers to draw the lines.

They usually chose a music video on youtube to listen and watch. Sometimes they would even sing out loud. I expected them to choose games but they did so once in a while. If they made an effort to compensate for their noisiness I would erase the lines and let them engage in an extra activity. This works for a class, but not necessarily to have individuals behave better. Be careful not to encourage negativity towards a single student.

I have been using classbadges.com together with charts on the board for this purpose. I have their names on the wall and get points of different color according to their behavior. Green is positive, orange shows they are getting restless and red if they are discourteous. While my charts are very simple. you’ll find Teacher’s pet Wall chart conspicuous.

I have found  other ways to use traffic lights in the classroom. There are many creative and industrious teachers out there!

You bet! Have you ever heard of kawaii? In Japanese kawaii means cute,lovely and charming. Fruity Cuties is a webpage which presents adorable fruit and vegetable characters. According to them they are “the largest kawaii fruit website in the world”. There are jokes sorted by character, theme and date. Short animations are available on Fruit TV.

Besides, you will find wallpapers in the Goodies section. They can serve as great visual aids, too. My favorite is the one of Turnip Turtles. Why not use it as pronunciation practice?

By the way, Halloween is coming! Unfortunately, I’m not teaching my young learners the topic this month.However, if you teach chidlren you could use the Monster Maker game to have your young learners practice Speaking with some vocabulary about fruit.

They can also send their creation to the Wall of Weird. Convince them to add a description, too. 🙂
Fruity Cuties facebook
Avatar (waspberry)taken from http://www.fruitycuties.com -Goodies section!

At school students are awarded with diplomas or certificates they can show their parents.  Children and teens respond well and they become aware of the importance of their achievements. I remember I attended a school where we obtained points every time we fulfilled certain tasks. After a couple of weeks we could choose a reward which cost a number of points from a box.

Young learners like to be praised and they appreciate significant rewards. I try to reward each and every student for different accomplishments but only words aren’t always sufficient . We try games, songs and other activities they might like when all the class has behaved appropiately. Even so I aim to get the uneasy or disruptive students to be aware of any improvement they make so they get motivated and arrive to class with a different attitude.

I also give them stickers and draw stars or write positive comments on their notebooks but a badge includes an image and a message. You easily make a clear statement about what you are recognizing. I had written about using Thinglink to use virtual badges but I felt it wasn’t that motivating. I started looking online for better options and I found Classbadges. Through  this site you can award unique badges to each student and it’s free! Another advantage is that students won’t lose their badges somewhere and they can see and show many they accumulate. Besides, teachers can use the information to assess their progress. 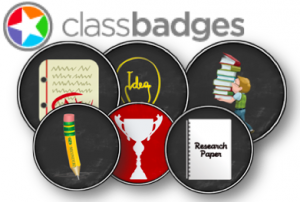 I’ll explain how to use it the simplest way.

2. Manage classes: create a class and add students. I created each student account with their first and last name. Their password is their mother’s family name. Adding an e-mail is optional.

3. Create badges: There are many images ready to use. However, if you don’t find a suitable one for you students’ needs you can upload your own.

I’ll show you my badges. The description of each one is in Spanish beacuse most parents don’t know English.

4. Award badges and let students know! Encourage them to show them to their parents.

I told all my students about it and I try to award them for their use of English, completing their homework, sharing,  improving their behavior, etc.

Show your students you care and they will react positively. Don’t forget to make them feel you are excited about everything that happens in the classroom!

For more ways to use badges watch: